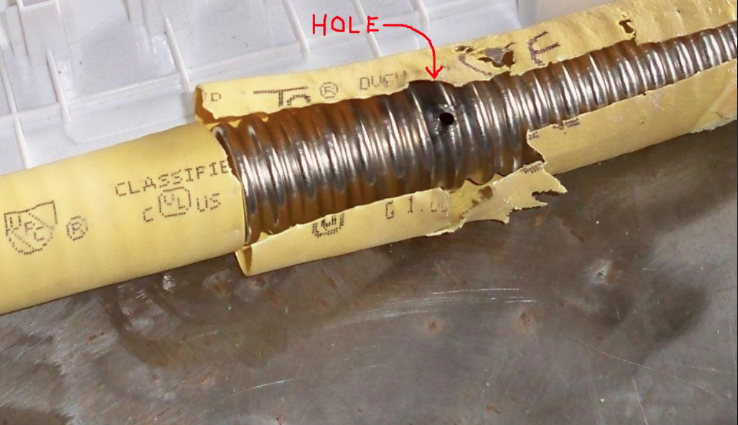 The number of people switching to natural gas as a fuel source is ever growing. It’s obvious the frequency of “gas calls” in which we respond seems to be increasing by the day. With this becoming a solid reality, the opportunity of becoming complacent as a fire service when responding to these calls has become a tangible threat. The following is a call we responded to where even the gas company representative was surprised to find what had materialized.

While returning to quarters from a car fire on I95, a call was dispatched for an (odor of gas in a house).  We had just passed the street of the incident location, doubled back, and arrived on scene in under a minute. The quick response time was pertinent in the end to what actually transpired. We arrived to find a two story, wooden framed, multi-family (town house style) structure.  The resident met us outside and stated “I was doing a load of clothes in the dryer and heard a loud bang.  I unplugged the dryer, came outside, and called 911.”  Our company entered the front door of the unit and found the stairs to the basement. An odor of gas was detected at the top of the stairs however descended the stairs to find no odor of gas.  We located the electric dryer, which had been unplugged prior to our arrival as reported.  With no odor of gas in the basement, the only thing we detected was the sound of either air or water flowing through a pipe. We investigated further and all members agreed it was the sound of air flowing from an unknown source.  After further investigation, we were able to identify the source by feeling air pushing from what appeared to be a gas line.

The line was a (C.S.S.T.) Corrugated Stainless Steel Tubing; which is a flexible, stainless steel pipe used to supply natural gas and propane in residential, commercial and industrial structures. [A big advantage of (C.S.S.T.) is that as opposed to iron pipe, it is flexible, allowing it to be snaked around walls and other obstacles. It also allows for less joints, providing for less of a potential for leaks. It is often coated with a yellow, or sometimes a black, exterior plastic line.] The (C.S.S.T.) was in direct contact and running underneath the metal dryer vent pipe.  The specific point where the dryer vent pipe and (C.S.S.T.) were coming into contact was so tight, the airflow we felt was being pushed around the sides of the contact point. We gave the

Incident Commander a C.A.N. report. He reported back there was a strong smell of gas on the outside of the structure, especially on the Charlie Side. With confusion as to why there was no odor of gas in the basement, we followed the line back to where it was coming into the house to ensure it was in fact the gas line.  All readings in the basement on the 4 gas meter were within normal limits with 0% LEL. Exterior crews located and shut off the gas meter. Immediately after shutting off, the gas the leak obviously stopped. Crews opened up the Bilco Doors on the Charlie Side of the structure to allow for natural ventilation. All companies cleared except for ours and the Battalion Chief as we awaited a representative from the gas company to arrive on the scene. Upon arrival, the Battalion Chief and myself gave a verbal report of our findings. After the gas company’s investigation, the representative reported back a version of the following: