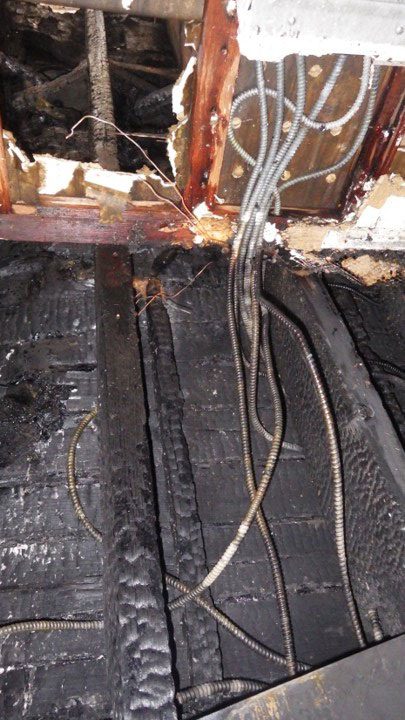 The Importance of Locating the Fire First

By Danny Sheridan – Photos by author except as noted

In the past few years there has been an increase in the number of top-floor fires. Top-floor fires generally morph into multiple alarms with heavy losses. Historically we would get a few top-floor fires and sometimes the fire would extend into the cockloft[1]. More recently, however, fires are not starting in the top-floor apartments but rather in the cockloft itself. It appears that the electrical BX wiring that runs through the cockloft is causing this new fire problem (photo 1).

The fires that start in the cockloft and go undetected for a long while before presenting are creating advanced fires on arrival. Companies are being called for an investigation of an odor smoke in a building and are frustrated because of the difficulty in locating the fire. Heavy blown insulation (photo 2) and multiple ceilings (photo 3) are keeping the problem hidden for longer periods of time. This doesn’t pertain only to top-floor fires but also to any odor of smoke. I am not quick to dismiss any odor of smoke. It’s easy to give up and attribute the call to an odor of smoke that is dissipated, but if you are wrong it can be a major problem.

When I was a lieutenant covering in a ladder company, we received an odor of smoke in an apartment on the top floor of a six-story multiple dwelling. We entered the apartment and the occupant informed me that he was smelling a burning odor all night. We started searching for the source to no avail. It was frustrating, I knew that there was something burning but just couldn’t find it. The odor was strongest in the boy’s bedroom. I tried turning off the lights in the apartment and shone my light up to ceiling. I did see the smoke particulates in the light stream. I took a second to collect my thoughts. I looked at the whole scene. They had young kids I thought to myself: “What kind of mischief would a seven-year-old boy be up to?” I know what I did at that age–lots of dumb things.