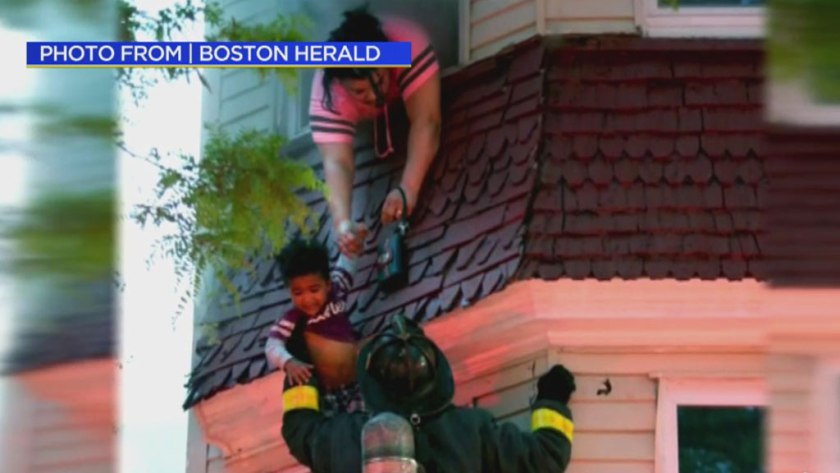 BOSTON (CBS) – A Dorchester mother says it was the most nerve-wracking decision she has ever made to hand her son to a Boston firefighter out a third floor window as smoke and fire was building around her.

It was three-year-old Alexander Abad who first spotted the smoke out the window and ran to his mother Marilyn Abad. It started the harrowing rescue captured by a Boston Herald photographer as firefighters hoisted a ladder with Abad dangling her son from the triple-decker.

“She’s screaming to the firefighter, ‘don’t let my kid be dead,’” said her boyfriend Victor Zapata who translated for Abad.

She says the stairwell was too smoky to escape and the window was her only choice. She says if she got desperate enough she would have dropped her son. “She’s feeling good because she knows the baby is going to be safe,” said Zapata.

It was Boston firefighter Patrick Callahan, a six-year veteran of the force, who made the rescue saying he was trying to assure Abad through it all. “As soon as I was handed the toddler I tried to walk her through it. I said to relax as much as you can because there’s more guys coming,” Callahan tells WBZ-TV.

Firefighters then helped Abad to safety and she and her son were rushed to the hospital for smoke inhalation. Callahan says it’s the outcome firefighters hope for and train for. “When you can save a life it’s the most satisfying thing about the job,” he said.

Marilyn Abad says she’s thankful to Callahan who called it a team effort.